How Much Gear Is Too Much Gear?

I promise you that when I bought my bike a few weeks ago I had a conversation with myself about not buying unnecessary gear. Swimming is my first love and okay I have five or six bathing suits and about six pairs of goggles, two different types of flippers, ear plugs and several bathing caps that I don’t even wear. All essential stuff. But now comes the bike. Two weeks in I had to get a more comfortable seat and riding gloves. Now I am contemplating new pedals because my feet keep slipping off of mine. Oh for goodness sake, I do not want to buy bike shoes and pedals. Did I mention that I am riding in my baggy tee shirts and running pants. Don’t say it! Riding clothes? Where does one draw the line?

My third ride this month after a twenty year layoff. Better than the last but I still get numb, cold fingers and that makes riding tough. I am not sure how I can rectify this situation. I had on my new bike gloves not sure of their benefit actually.  I did six miles but just couldn’t feel my fingers any more. Oh did I mention that I’m as slow as molasses? 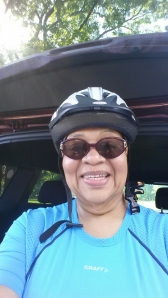 So after not riding for over twenty years I bought  a bike three weeks ago.  They have a name for the category but I guess you would call it a hybrid bike. It’s a Giant Escape. I am not ready for a road bike and probably won’t ever be.  My goal is to ride at a reasonable rate of speed  and finish in a reasonable time (for me) in my triathlons.  This bike is a major step up from the heavy borrowed mountain bike that I rode a few times this past fall.  Anyway I am still learning how to ride the dang thing. I had no idea how to use the gears. Little by little I’m getting the hang of it. But here are a few things that I didn’t expect.

It’s still been cool in the morning and my hands have been freezing.  I didn’t expect that. My right hand actually got so cold and numb that I couldn’t feel my fingers or change my gears without trouble. Part of the problem is that I have a death grip on the handle bars. This is related to the fear that I still feel when riding. I bought some riding gloves but haven’t been on my bike  due to my ongoing knee treatments.

The second thing I didn’t expect was how excruciatingly uncomfortable a bike seat could be. It was so uncomfortable I had to stop riding. I bought a new seat but again I haven’t had a chance to ride with it.

Issue number three is that my feet keep slipping off of the pedals. I discussed this with the folks at Hilltop Bicycles where I bought my bike but they could only suggest cages or clip pedals.  Both scare the life out of me but I may have to reconsider if my feet keep slipping.

So if biking isn’t your thing but you need to ride I suggest that you buy your bike from  folks in the know. New or used a bike shop is a good place to go. Get the best bike that you can afford. Be ready to maintain it properly and take good care of it.  Although I haven’t been able to ride with them I belong to a group of female riders HbWomen who ride out of the Hilltop Bikes in Summit and Cranford. They are supportive and helpful and know a lot about riding.  If you are unsure, look for a group that can support you.  Lastly, just go for it. I am still nursing a bit of fear but it gets easier every ride. More bike stuff later.

So I just read Leah’s comment to me and I do have to remember that I am not competing with those ladies that are setting their watches and running like hell into the water. I cannot promise yet that I won’t let them fluster me. In the end of April my buddies and I entered and indoor Triathlon at Montclair State University here in New Jersey. This was just for fun as far as we were concerned. I didn’t even know that the “winners” were getting prizes. So the deal was swim for 10 minutes, ride spin bikes for 30 minutes and run(in my case walk) on the treadmill for 20 minutes. Keep in mind that I swim three to four days every week.

We had to swim two in a lane. I was in the lane with Debra who is one of our teams best swimmers. When the man said go I began to swim and by mid length I had lost it. I couldn’t breathe and was convinced that I was going to swim in to Debra who was at least a half-length ahead of me. I would be embarrassed to tell you how few lengths I did in 10 minutes.  The bike and treadmill were fine.

So what’s my point? Most of the Triathletes that I have met so far did one of the three sports when they signed up for the Tri. In my case swimming is my sport. That doesn’t mean I’m good but I’m consistent. So I was extremely upset when it was over and I had gotten so psyched out that I couldn’t do the one thing I am counting on in the Tri.

I must get control of the mental game to finish this thing. Some of those ladies can be pretty aggressive when they are doing their Tri’s. That coupled with open water (I am a pool swimmer) has me pretty nervous. Not to mention that I am incredibly slow in all three at this point.

At least I can swim with my age group not that there aren’t competitive, aggressive 60+ women but maybe they’ll be nicer? We’ll see won’t we.  Jersey Girl Triathlon, August 3, 2014, Long Branch, New Jersey will be my first!

If At First You Don’t Succeed, Tri, Tri, Again

Haven’t written in a while but I am still here. My very first  Sprint Triathlon is scheduled for August 3, 2014 and I am getting ready in my head. Now you know that I have talked about this for a long time. First steps were hard. I spent the winter having an on again off again swim season. Our pool was down for some time and I was lazy when it was up. I found out that stamina leaves in a short amount of time. It’s May and I’m really not ready to do the 300 yds yet. On top of that I bought a bike two weeks ago and had to deal with my serious fear of riding. I have been on the bike a few times but there is still a lot of work to do there. I had a needle in my knee yesterday and hope that after the three shot series I will have less pain in it which will make walking easier. I will be walking the 5K part of the Tri’s. Anyway I’m back and will be talking about my road to Triathlon in the upcoming days.