Is It Too Late To Try Something New?

This morning on one of the AM shows there was a story about a gentleman who retired at 61 from a variety of jobs including selling real estate. When he had been retired a short time he decided to try his hand as a comedian. Today at 67 he has a flourishing though not terribly lucrative career. He and his wife will not get rich off of this new career but it pays a few bills and has great perks. He now teaches classes on public speaking and comedy on cruise ships and though they don’t pay him, he and the wife cruise for free! Last year they spent 100 days at sea free of charge. He is getting to be well known in Florida and is generally enjoying himself. So who says it’s too late for a change?

Laboring in the Vineyard

I should have started this a few weeks back but didn’t have the time so this weekend DH and I spent hours in the yard. Our farm plot (actually three raised beds and a few pots) is looking good. We began planting seeds and small plants and I intend to add a few more. Now however I am fearful of our growing critter family. Did I mention a small bunny that is not fearful of people ( you can walk right up to him) and that Roscoe our groundhog is really Roskette because she has four babies trailing behind her. So I may have to revamp my previous posture of live and let live and find a way to have the kids relocated. Stay tuned for further episodes. 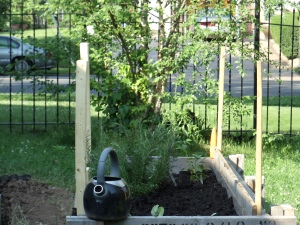 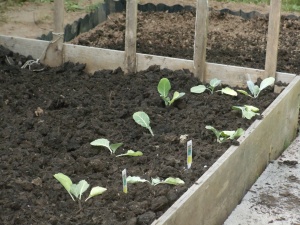 Sweet Magnolia Blossoms from the tree in my yard. Could anything smell sweeter?

Have a good evening.

Put Down That Rock

Last Sunday my friend Michelle who is also my pastor’s  wife spoke along with her husband at a Women’s/Men’s Day program at the church they grew up in. My husband and I attended the service and  I could have sworn that she wrote her words just for me.

She told the story of God asking a woman to take three rocks to the top of a hill. Of course she agreed and went on her way. Along the way she meets a friend and tells them where she is going. The friend  asks her to take a big stone up the hill for her. To make a long story short by the time she gets three-quarters of the way up the hill she has filled her cart with everybody’s rocks and can’t go any further. She begins to cry and God comes to see what is wrong. He asks her what is in the cart and she explains what happened. He goes over to the cart and dumps it out leaving the three rocks he gave her to begin with. She is relieved and goes on up the hill with her rocks. Michelle closed by saying ladies stop picking up everybody’s stuff, just worry about your own.

So this week I’ve said to myself are those my rocks or do they belong to somebody else? Concentrate on your own stuff it’s enough!

Watch Out For The Slippery Slope

Sometimes you have climbed the sliding board and are on your way down before you realize it. Today I started out in a good mood and with a series of events including the news that my car needs about $1,200.00 of work and before you knew it I was sliding down to funk land. So okay some days are better than others but getting into a funk rarely helps. It’s a holiday weekend. No work until Tuesday, food in the fridge, gas in the tank and relative good health for us all. I’m gonna shake it off and find the thankful spirit that I know I have. Anybody care to join me?

My Mom who is 96 say that all the commercialization in regards to days like Mother’s Day is a real joke. She also says that you should treat your mother nicely everyday. Two good points I think. We didn’t do anything special today. My husband and I went to church and gave my Mom a card. I got a call from my  Son and Daughter-In-Law and my niece as well as messages from many friends. That’s the important thing. Not the candy or flowers or fancy dinner. Don’t feel that you didn’t do enough if you couldn’t get all the stuff. Thanks Mom or I love you Mom is worth a lot more.

Happy Mother’s Day or as I call it Sunday!

If You Want Something Done, Do It Yourself

Well it took me a lifetime to figure that out. My Mom lives her life thinking that people are obligated to do what she wants. I have lived mine hoping that people will do what I want. We both get the same results because people are going to do what they want generally and  not what someone else wants. So finally I get it. If  I need something done, I need to figure out a way to do it. If I can’t do it, I need to pay to get it done or barter the service. If along the way someone volunteers to do it, I’m ahead. This is not lowering my expectations of others, rather I see it as raising the bar for me. It will make me work out solutions rather than hope that someone will do it for me. You’d be surprised what you can accomplish if you put a heavy dose of brain cells to it!

My Mouth Wrote Another Check the Rest of Me Can

I was worried that I would be unemployed this summer and then I got a call asking  me to teach three summer school classes. Not bad seven weeks and done. I said yes to all three. Two are in the day and the last class is 7:40 PM. Did I mention that I have to teach four days a week? What the heck was I thinking. My regular routine is shot to heck. I’m not sleepy at night but can’t get up in time to work out. Can’t make any of my Zumba classes. Lots of work. This is week two and I am already dragging. Really happy for the pay but I will be earning every penny

Signs of Summer The First Watermelon

I realize that the rest of the world doesn’t celebrate this auspicious occasion but it brought tears to my eyes. I took a chance and bought a melon at the store next to my Weight Watchers meeting. Paid $8.00 for it but guess what, it is so sweet. I can’t tell you the delight I felt. Hopefully this a good summer omen. I so enjoy summer fruit. Melons and berries and peaches oh my!  Happy Cinco de Mayo